Did God Really Create The World In Six Days?

Did God really create everything in six days?

The God who kept Daniel safe in the den of lions. The God who turned Aaron’s rod into a snake. The God who raised people – and Himself – from the dead… Could He really have created the entire planet and everything on it in a mere six days?

Somehow a lot of Christians overlook the other miraculous accounts in the Bible when it comes to the topic of creation.

There seem to be no second thoughts about the accounts of David and Goliath, Jonah and the whale or Noah and the ark. But the Genesis account?

You hear objections like, “Well, the Bible isn’t a science book…” or, “Well, THAT part isn’t supposed to be taken literally…”

Why the skepticism? If God is God and can do anything, why couldn’t He create the world in six days? After all – He’s God! He could’ve created it in six seconds!

Over time, the authority of God’s word has been questioned by scientists and secularists. The theory of evolution has been presented as the answer to the age-old question, “Where did I come from?”.

And Christians have bought it, choosing to believe fallible man instead of the infallible God.

So, what’s the truth? Can we ever even really know for sure?

As it turns out, the truth has been right under your nose along… Right there on the first page of your Bible…


ORIGINS IN THE ORIGINALS

In Hebrew, the word used throughout Genesis (and other places in the Bible) for ‘day’ is ‘yôm’. This word typically means an ordinary day.

As with most words, it can have other meanings, too, just as our own English word, ‘day’, can have multiple meanings:

As well as meaning an ordinary day, ‘yôm’ can also mean a period of time, as we see in Genesis 2:4, which states, “These are the generations of the heavens and the earth when they were created, in the day that the Lord God made the earth and the heavens.”

So, which meaning does it have in Genesis 1?

When a word has more than one potential meaning, we can discover which meaning is intended by looking at:

When ‘yôm’ is written in context with…

So, let’s check. Are any of those found in the creation account?

God saw all that He had made, and behold, it was very good. And there was evening and there was morning, the sixth day.
(Genesis 1:31)

The truth is unquestionably clear.

Yôm always means a literal, 24-hour day when used with any one of these qualifiers (evening, morning, number).

The fact that all three are repeatedly used together throughout Genesis 1 reveals an extra emphasis that leaves no room for any doubt: God created the heavens and the earth and all that is in them in six literal, 24-hour days. 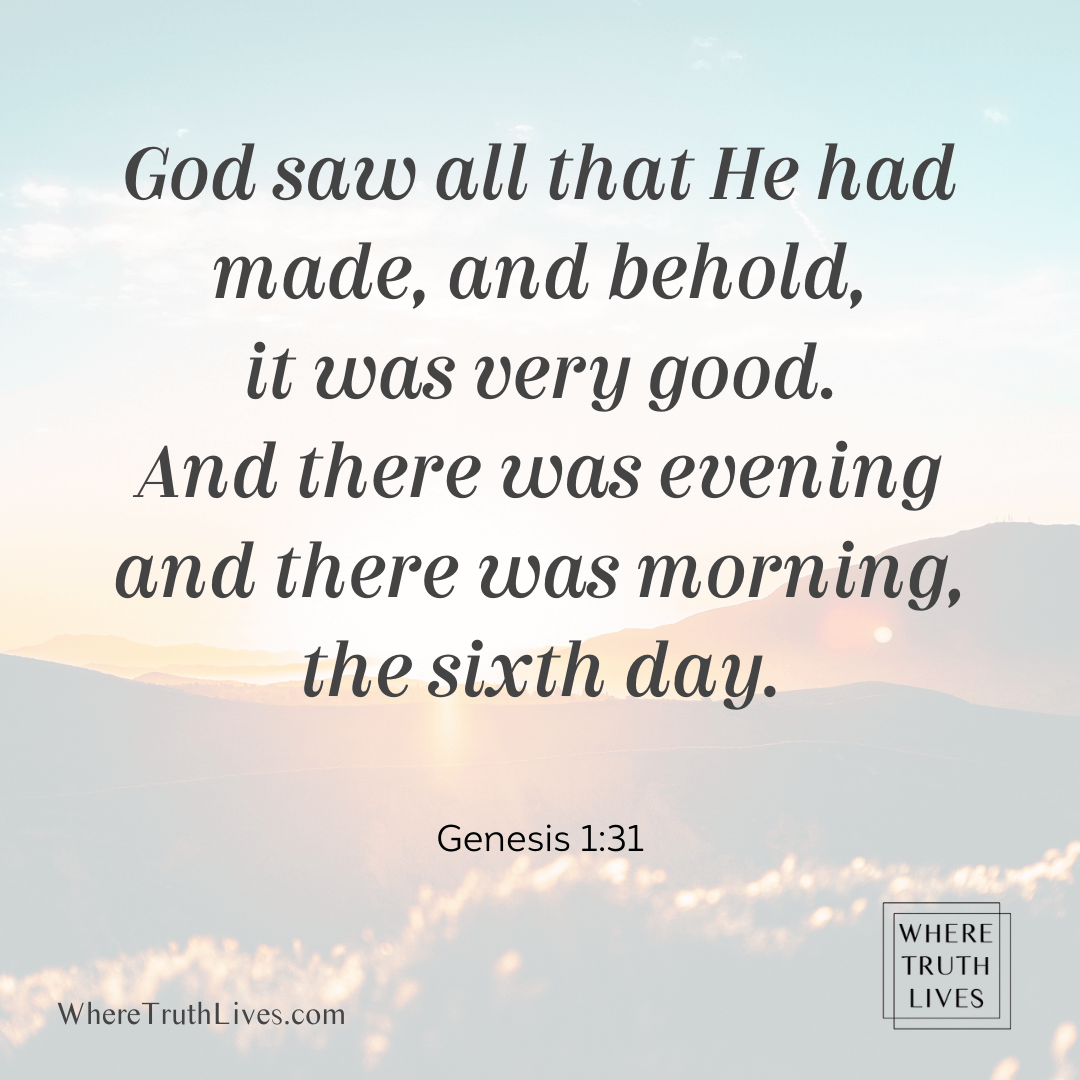 THE REASON FOR SKEPTICISM

But wait – If Genesis 1 makes it so undeniably clear that the days of creation are literal, 24-hour days, then why is there so much debate?

The answer would take a separate blog post to fully explain, but it basically boils down to man’s attempt to disregard the authority of the Word of God.

Modern scientific dating methods are based on assumptions. These assumptions are further based on the unscientific theory of evolution.

(Note: the ‘theory’ of evolution is simply that – a theory. One that even Darwin was willing to dismiss if compelling evidence to substantiate it could not be found. Yet, today, people speak of ‘evolution’ as though it’s not a theory, but a proven fact. Nothing could be further from the truth. Evolution is not a fact, it is not proven, and it is utterly unscientific and therefore unable to even be proven.)

Scientists reckon that the earth is approximately 4.54 billion years old.

(Of course, this number continues to change and has changed many times in the past few decades, namely because unreliable dating methods are used.)

The quibble about the creation days stems from man’s attempt to fit these supposed billions of years into the Bible, when in fact, we should understand the Word of God as the authority on all things it mentions – including our origins and the timeframe of creation.

In Exodus 20:11, in one of the Ten Commandments, the Word of God restates that creation took place in six literal, 24-hour days: “For in six days (yôm) the Lord made the heavens and the earth, the sea and all that is in them, and rested on the seventh day; therefore the Lord blessed the sabbath day and made it holy.” (also Exodus 20:1, Exodus 31:18)

In the New Testament, a synagogue official refers to the six days of creation and one day of rest spoken of in Exodus 20 when he objects to Jesus healing a woman on the Sabbath (Luke 13:14)

Throughout the Old Testament, the word ‘yôm’ is used with a qualifier (outside of Genesis 1) over 2000 times, yet it is only in the very first chapter of the Bible that people are so unwilling to accept what the text truly says.

As Ken Ham (of Answers In Genesis) often points out, no one suggests that the seven days Joshua marched around the walls of Jericho or the three days that Jonah spent inside the whale could possibly be seven million years or three unknown lengths of time.

Genesis 1 actually has more contextual qualifiers than these other two passages put together, yet it is the one that so many are stumbling over and refusing to believe, even though all the proof needed is right there in the Hebrew text.

WHY DOES IT MATTER?

Many Christians seem to think that the topic of origins doesn’t really matter, at the end of the day. After all, it’s not talking about salvation, so why the fuss? What’s the harm in holding a different viewpoint?

Let me ask you: how do we know about salvation?

How do we know that Jesus died and rose again to pay for the sins of the world?

Romans 10:17 says, “So faith comes from hearing, and hearing through the word of Christ.”.

If we disregard the authority of God’s Word in one area, we’ll soon disregard it in another area, too.

It’s already happening in our culture – man’s fallible ideas are being imposed on to God’s infallible facts. Such rebellion leads to dire consequences in this life and the life to come.

This includes the very first chapter, which makes it emphatically clear that it only took six literal, 24-hour days for God to make all the splendor of creation.

(Considering His power and authority, shouldn’t you be amazed that it took as long as that?!) 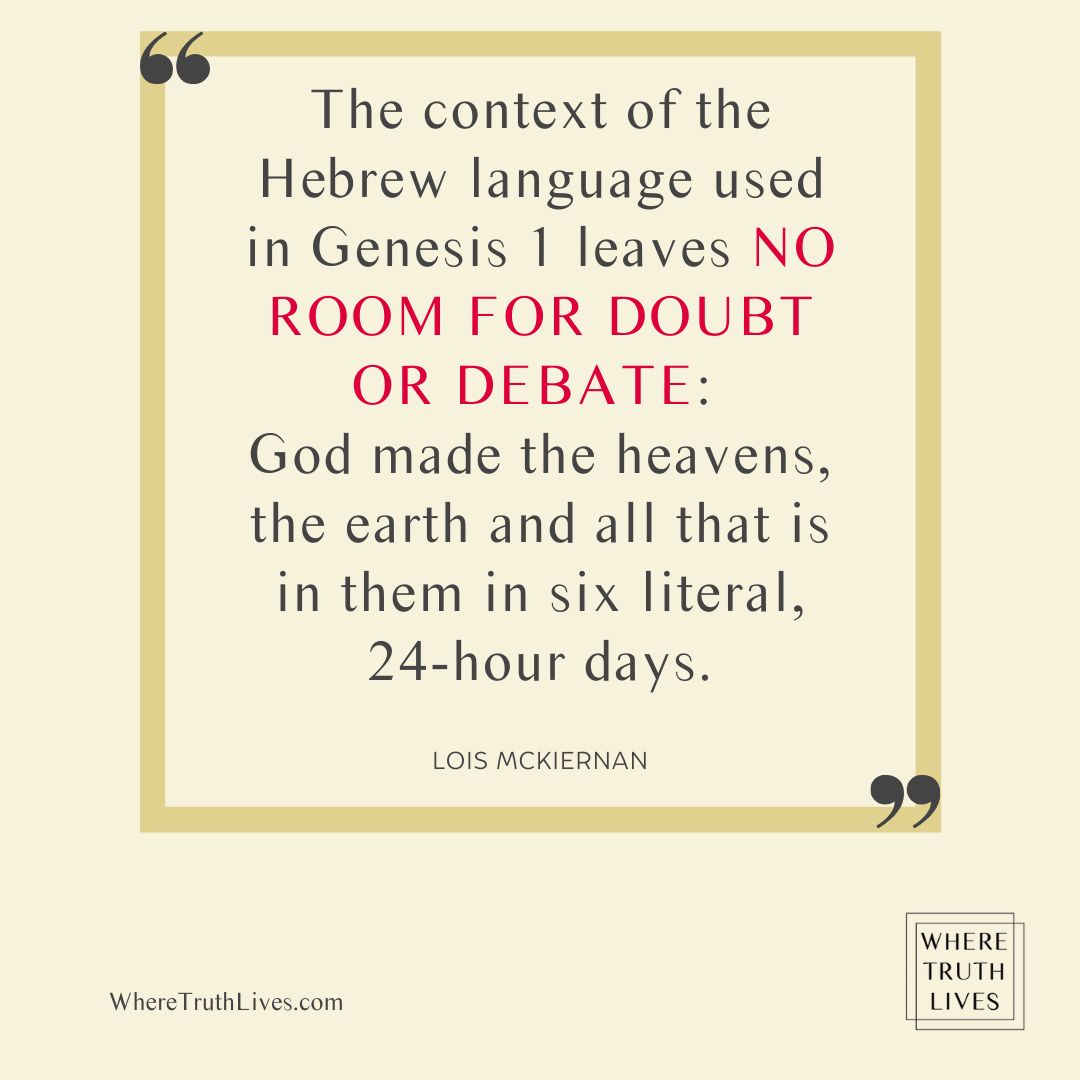 That the Lord will help you to understand and trust His word. Also, pray that He will give you the boldness to declare the truth in a world that doesn’t want to hear it.

Genesis 1 and 2 to discover the true order and account of how everything came into existence.

If you want to equip yourself and learn from some resources, I recommend the Answers In Genesis bookstore. It has a lot of really helpful resources on the topics of creation, origins, the authority of Scripture and much more. (My family owns a lot of the DVDs and books, and there is so much truth and value packed into each one – they’re excellent.)

The Hebrew language and context used in Genesis 1 leave no room for doubt or debate: God made the heavens, the earth and all that is in them in six literal, 24-hour days.

6 thoughts on “Did God Really Create The World In Six Days?” 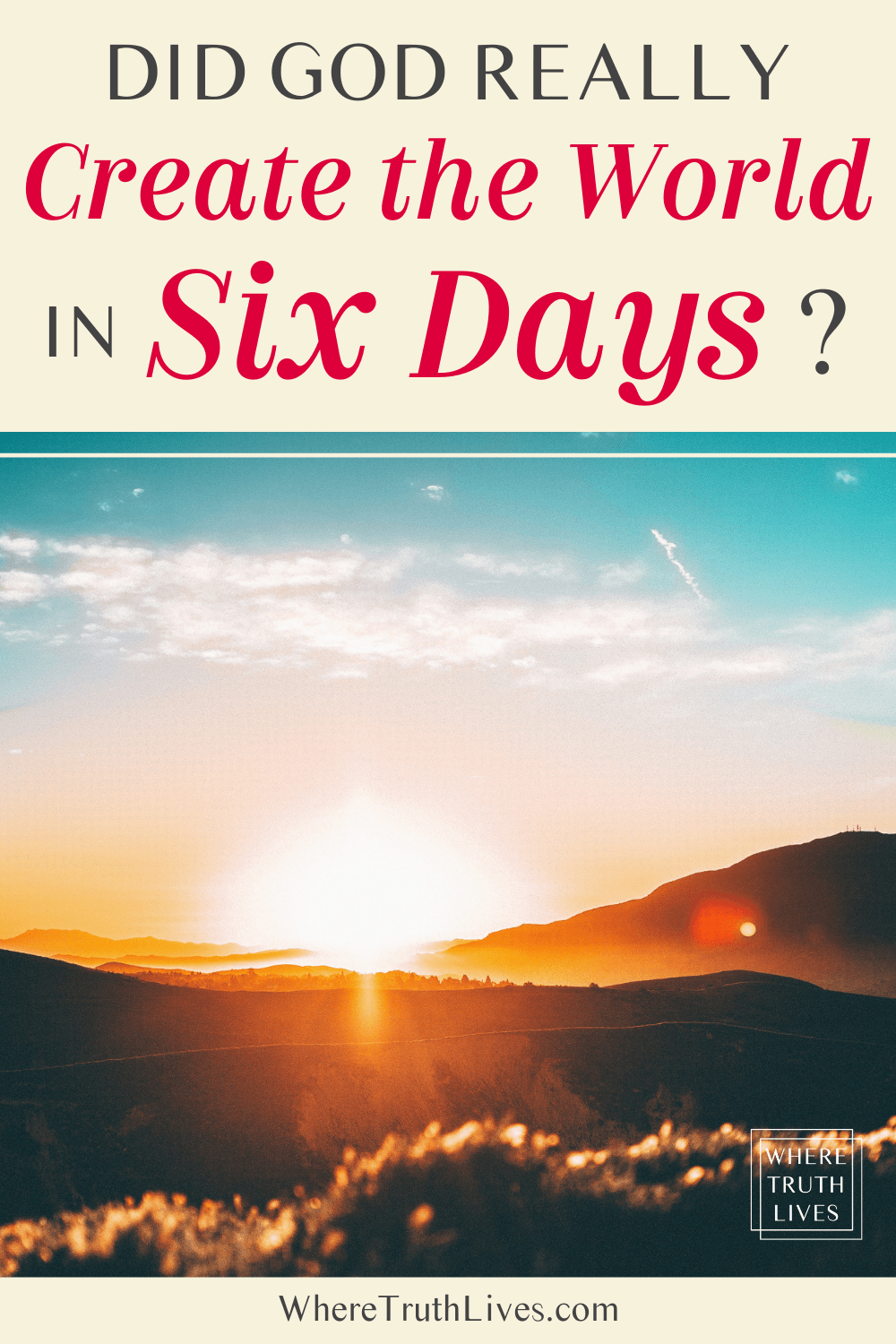 Are you missing the obvious?
Read this: The Unordinary Fingerprints of God
20 Shares